Commentary: Standing Up to Aggression in a Nuclear-Armed World 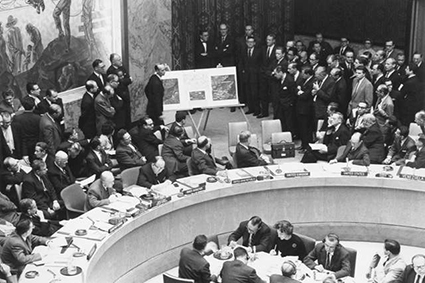 This commentary by international law expert (and former Walker Clark senior consultant) Gerald J. Kirkpatrick shows a way forward for the United Nations, if the United States and other western powers want to lead the way.

quoting from the introduction:

In modern times, peace and world order have been illusive, largely due to ideological and political divisions among the major powers, principally the Permanent Members of the United Nations Security Council.

The paper argues that the Permanent Member veto in the Security Council need not be a bar to calling upon the Members of the United Nations to take collective military enforcement action to deter or confront aggression or grave breaches of the peace anywhere in the world.  The 193 Members of the United Nations, acting through the General Assembly, possess the necessary legal competence to both deter and confront aggression in the present age, if the community of nations forges the political will and moral courage to do so, even in the face of an aggressor that possesses nuclear weapons and has made veiled threats to use them if provoked.

The paper lays out a path to this end.  As Russia’s unwarranted invasion of Ukraine demonstrates, nuclear blackmail by a Permanent Member of the UN Security Council has been added to the challenge of maintaining peace and order in a troubled world.  We live in unprecedented times that call for unprecedented action, and the need to act could not be more urgent or important for the future of humankind.

All books, commentaries, and papers about matters  that are featured on this website, but are outside the scope of law firm management issues, are endorsed because of their high quality and potential relevance and interest for lawyers worldwide. Any opinions expressed therein are those of the respective authors and do not necessarily relfect the opinions or advice of Walker Clark LLC.